This has been the most violent year in the City of Camden’s history.

Sixty-seven people have been murdered as of today, breaking the previous record of 58, set in 1995 – a 15.5% increase. Camden’s murder rate was the highest in the country this year until Friday, December 14, when Newtown, Connecticut passed it on that horrific morning.

The killing in Camden is an urgent pro-life issue in our own backyard. It demands a response from people of faith in South Jersey and beyond.

Every year since 1995, Camden’s Guadalupe Family Services (GFS) has offered its own response by organizing a Vigil for Peace, remembering the city’s homicide victims with an hour of prayer for each. 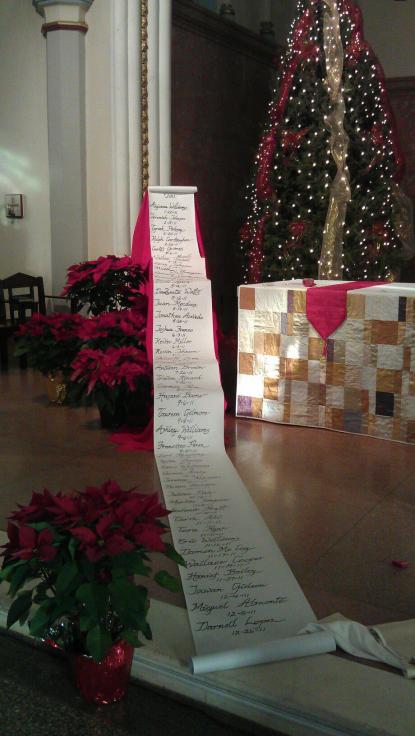 Each Camden homicide victim’s name is inscribed on a scroll, displayed at the annual Vigil for Peace.

Seventeen years ago, GFS Executive Director Sister Helen Cole, SSJ, who had recently arrived in Camden, met Lourdes, who was passing out flyers on State Street in attempt to find her missing 13-year old daughter, Shaline. Sr. Helen volunteered to help. Tragically, Shaline’s body was found a few days later, and Sr. Helen walked with Lourdes and her family as they mourned and sought justice through a five-year trial process.

As 1995 drew to a close, Sr. Helen and Jesuit priest Fr. Rick Malloy, who was also working in Camden, sat at the rectory dinner table at Holy Name Church and wondered what they could do.

Their first idea was to go to the mayor’s house at midnight and ring bells – a literal wake-up call. But they decided that a political action like that wasn’t what was needed most. Instead, they decided to organize an around-the-clock vigil of prayer and fasting, where they would pray for the victims of violence and their families, pray for peace in each of our hearts and in our families, and pray for peace in the city, state, country and world.

So they started that December with 58 consecutive hours of prayer and fasting – one hour devoted to each murder victim. Sr. Helen sent a letter to each family, inviting them to attend. Many did.

In 2011, Sr. Helen shows Samantha Tunsil the candle for Hanief Bailey, a friend of a relative of Tunsil’s who was killed in Nov. (TOM GRALISH / Philadelphia Inquirer Photographer)

Beginning Friday, the 18th annual Vigil for Peace will be held at the Cathedral of the Immaculate Conception in Camden. It will be the longest edition ever.

Tim Gallagher is a community outreach worker at GFS who has been involved in planning the last several vigils. “It’s not just a vigil for peace, but it allows each family member to know that they are not alone in this trauma and time of despair,” Tim says. “By seeing the scroll of 67 names, they are able to walk with other families throughout this whole horrible experience. We’re there for them and others are there for them. We as a church are there for them.”

If you are nearby over the next few days, stop by the cathedral for a few minutes or an hour. The schedule is printed below. If you’re far away, say a prayer for the City of Camden, and for God’s peace to prevail throughout the world. And whether you’re here or not, step up to Bishop Galante’s call to reflect on what you can do to build a culture of life in this world that is in so much pain.